October 3-5, 2017, the Youth Day: Dialogue of Generations was held at the third time. It is included in the official program of VII St. Petersburg International Gas Forum.

This international event creates conditions for an open dialogue between business representatives of energy industry and talented youth audience from the world’s leading universities and institutes.

Every year the Youth Day attracts the interest of constantly increasing number of students from all over the world. In 2017, there were more than 500 applications from candidates from all 6 parts of the world. To be selected on Youth Day 2017 they had to pass a serious challenge and to find solutions on business case dedicated to global LNG industry: the influence of regional markets potential capacity evaluation on the business model implementation for European energy company. Finally, 128 students from 40 universities of Russia, Belarus, Germany, the Netherlands, France, Austria, Great Britain, China, Bolivia and the USA took part in the Youth Day 2017. Another 70 field-oriented students from St. Petersburg universities were invited as audience.

Youth Day 2017 was launched on the 3rd of October with the Opening ceremony where the participants were greeted by Elena Kasyan, Chairlady of IBC’s working Committee “Human Resources, Education and Science” and Head of the Department of PJSC “Gazprom”, as well as by Yana klementovichus, Program Director of the project “Youth day” and Director of the Higher Economic School of St. Petersburg State University of Economics. Elena Kasyan also held a draw for the order of presentation of national students’ teams in Case Contest, which took place the next day. Then Sergei Gustov, General Director of “Gazprom LNG Saint-Petersburg” awarded the students with the best case study solutions. The official part was followed by the interactive-communication game on the gas theme, which helped students from different parts of the world to get to know each other closer. 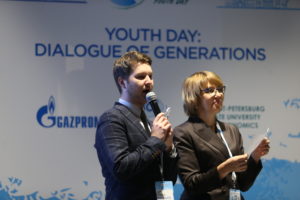 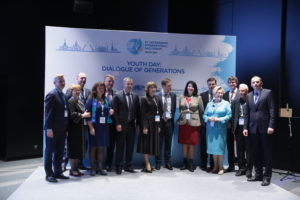 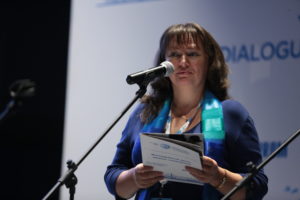 The great interest was raised by an organized excursion to exhibition of the St. Petersburg International Gas Forum. There were presented stands and exhibits from various gas companies, including the presentation of the projects at the stands of Gazprom LNG St. Petersburg and Gazprom gas-engine fuel. 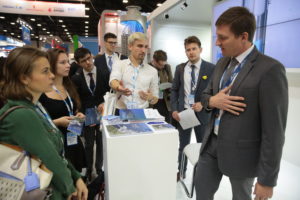 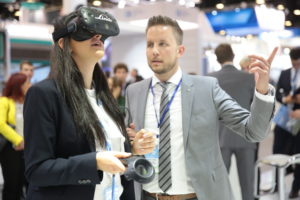 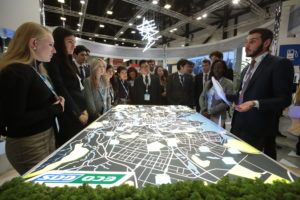 In the late afternoon the Youth Day participants got the opportunity to show their professional knowledge and skills in the international communication context. They could choose one of interactive workshops, held in the format of a business games, developed and presented by professional business coaches and experts of oil and gas industry: 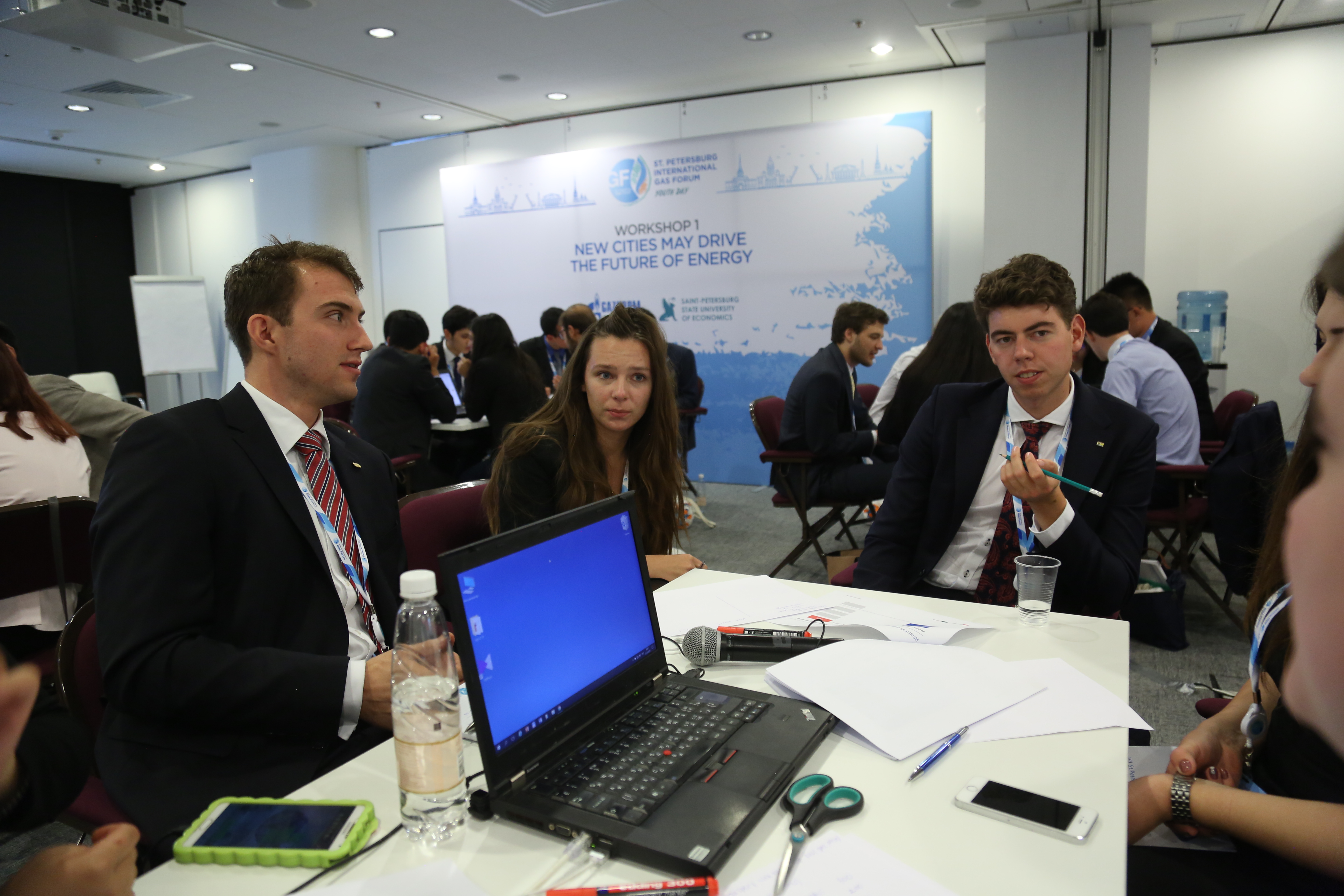 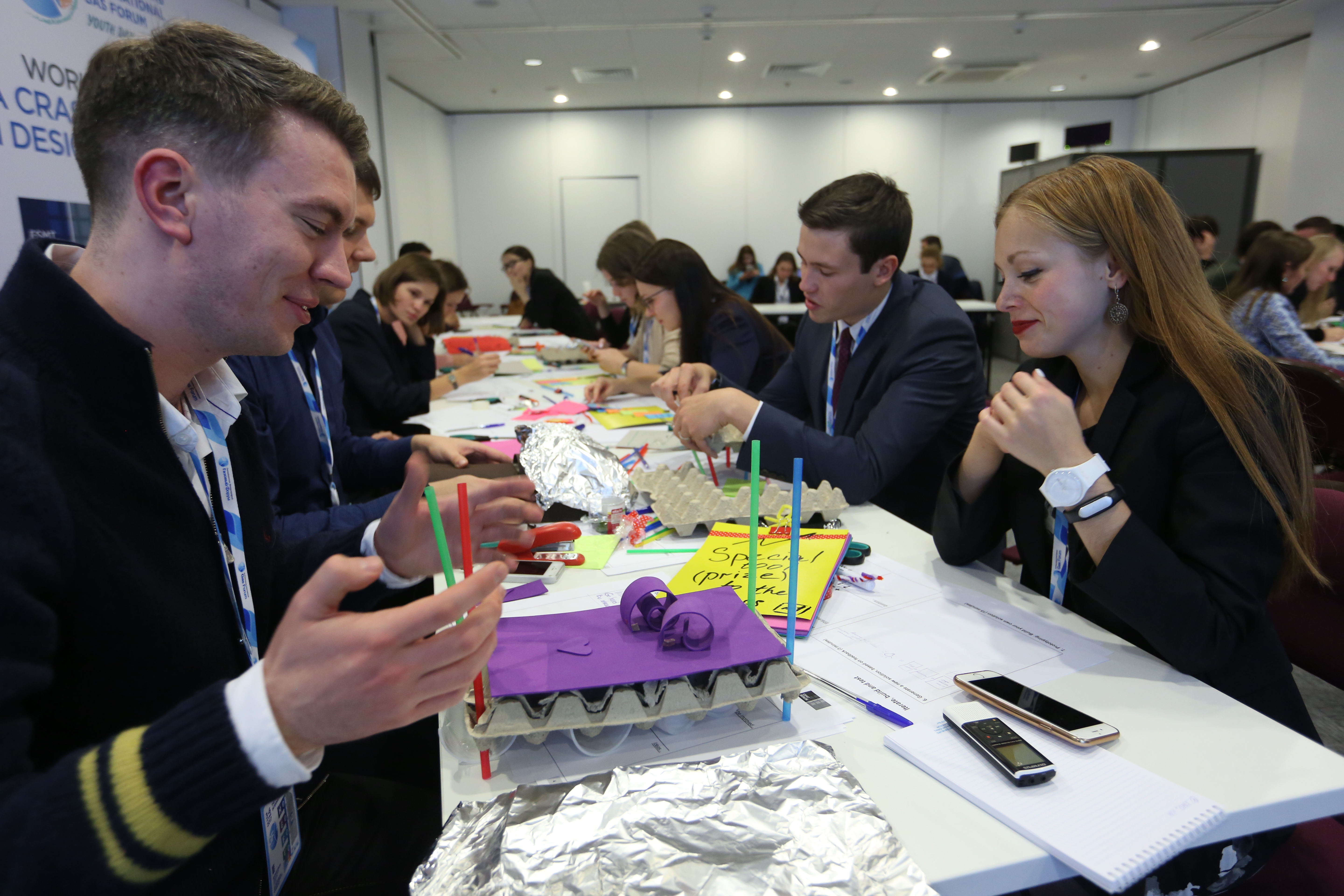 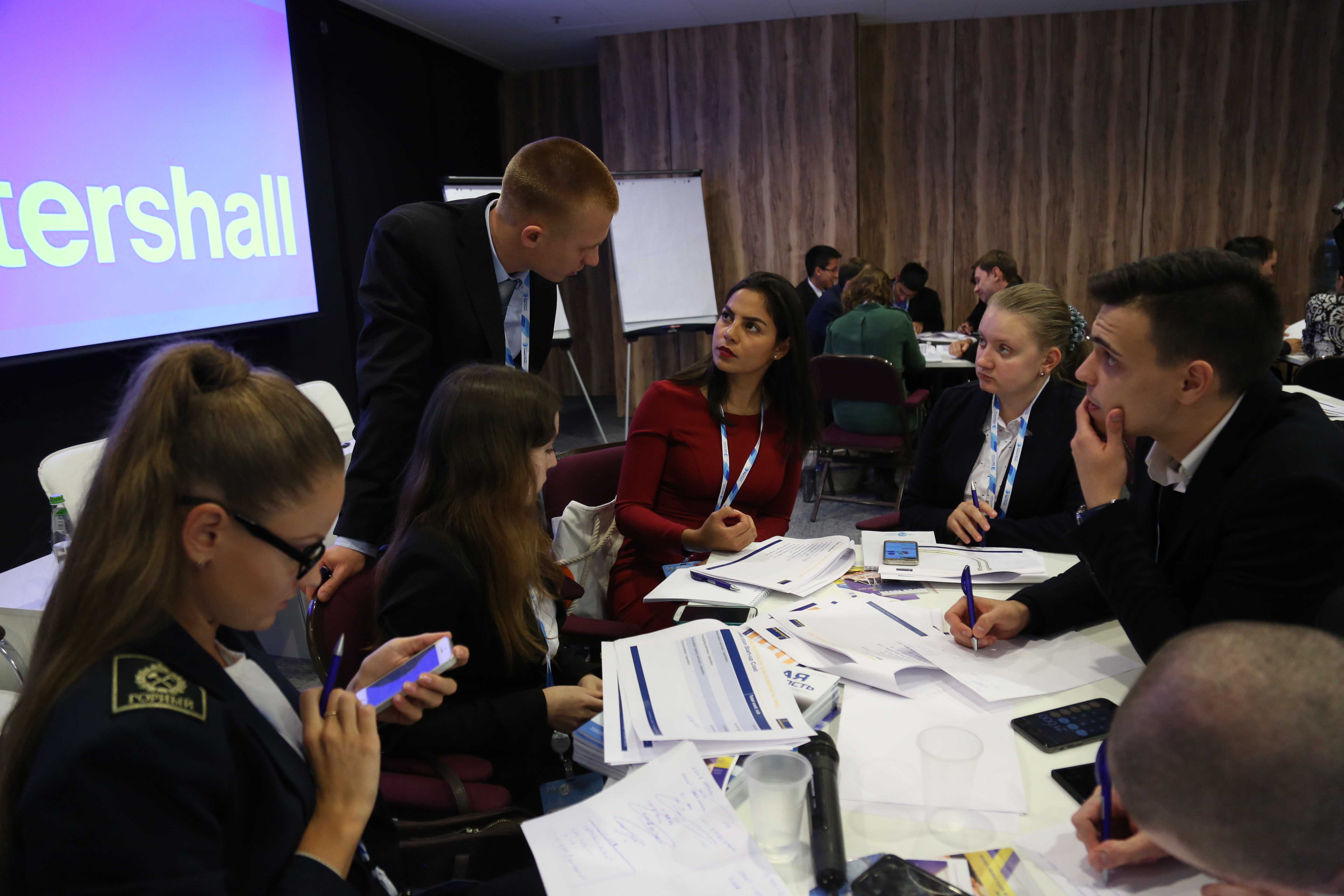 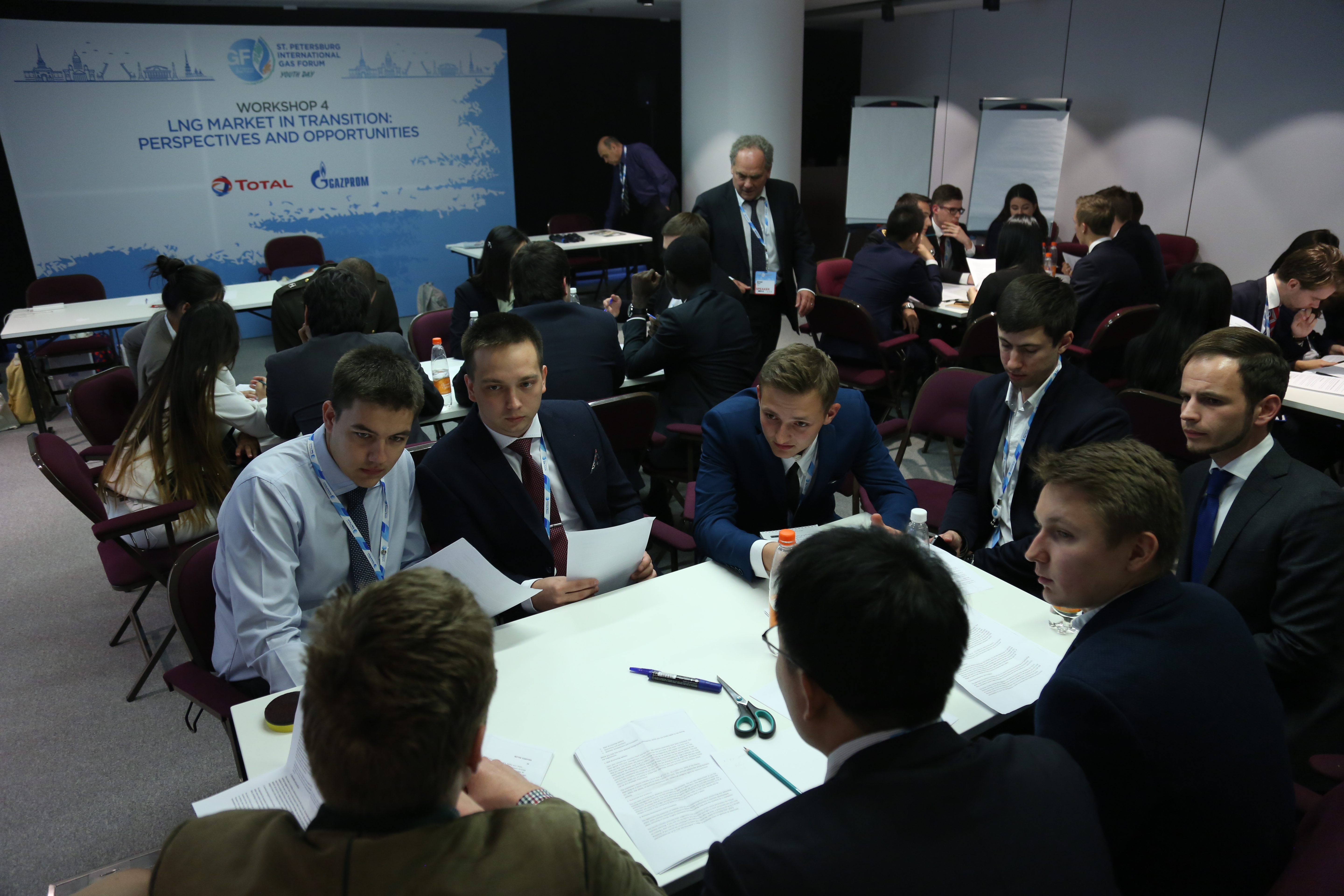 The second day program was held in a competitive format within the event Case Contest “LNG Future”. For three weeks 6 national students’ teams from Russia, China, Bolivia, Germany, France and the Netherlands were resolving the case study, created by the expert group from St. Petersburg State University of Economics together with experts from company Uniper. While the Case study participants had to go through the principles of forming a long-term strategy for global company presence on LNG markets based on a differentiated approach to countries and regions and taking into account their economic, sectorial and infrastructural development.

The participants of the first Youth day, held in 2015, Diana Tyrtyshova, Assistant Professor, Gubkin Russian State University of Oil and Gas and the winner of the Case Contest-2015, as well as Frederick Reimann, Consultant at Auxil Management became the moderators of Case Contest.

In a close competition, the team from France became the winner of the Contest. The second place is occupied by the team of Germany, and the third is the team of China. 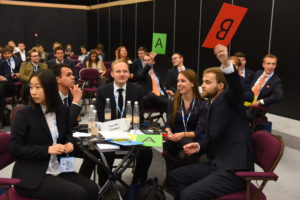 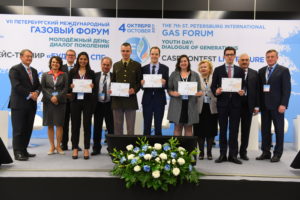 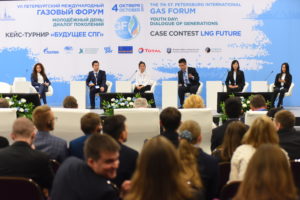 On the morning of October the 5th, all participants of the Youth Day were invited to the plenary session “The Role of the Russian Gas Complex in the World Energy Balance” of the VII St. Petersburg International Gas Forum. The speakers of plenary session were Governor of St. Petersburg Georgy Poltavchenko, Deputy Chairman of the Management Committee of Gazprom Alexander Medvedev, Minister of Hydrocarbons of Bolivia Luis Alberto Sanchez Fernandez, Chairman of the Executive Board of OMV AG Rainer Seele, Chairman of the Board at Uniper SE Klaus Schafer, Executive Director on gas business and new sources of energy, member of the Executive Committee of Royal Dutch Shell Maarten Wetselaar, Head of the consulting company Lambert Energy Philip Lambert.

The final event of the Youth day program was «Off-tie meeting» with CEOs. At the beginning, Sergey Khomyakov, Deputy Chairman of the Management Board of PJSC Gazprom and the Chairman of the Youth Day’s organizing committee gave a welcoming speech. He greeted his colleagues and audience and congratulated the French national team within taking the first place in the Case Contest. He announced the Grand Prix – internship in energy companies, Youth Day partners.

The Meeting started with short welcome speeches. Each speaker described the most important trends for his company and for the gas industry in general that happened over the last year, as well as new career opportunities it creates for young specialists. Then moderators asked the leaders about how they are building work with talented youth and how young specialists can pass through selection process, what especially managers pay attention to during the interview. 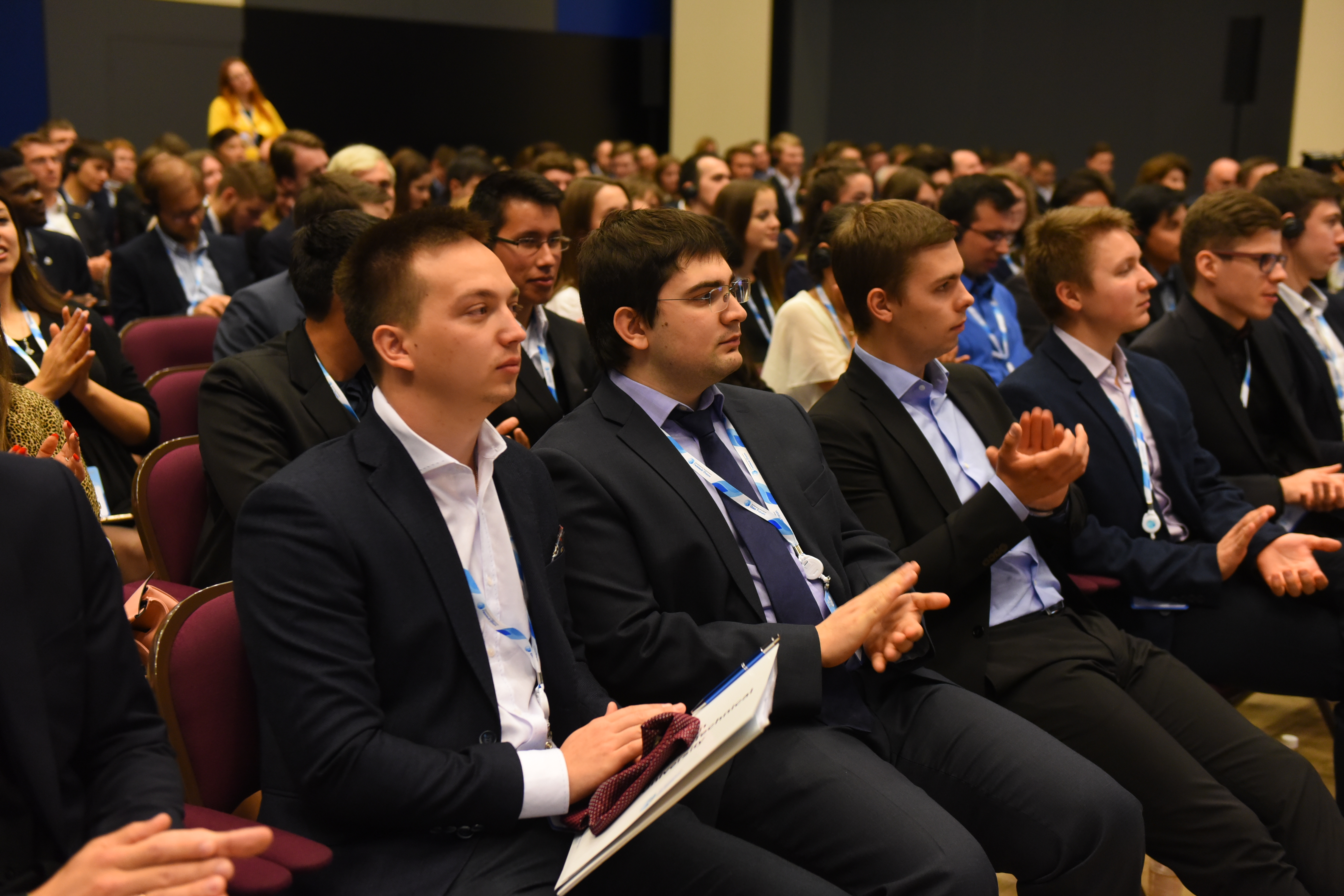 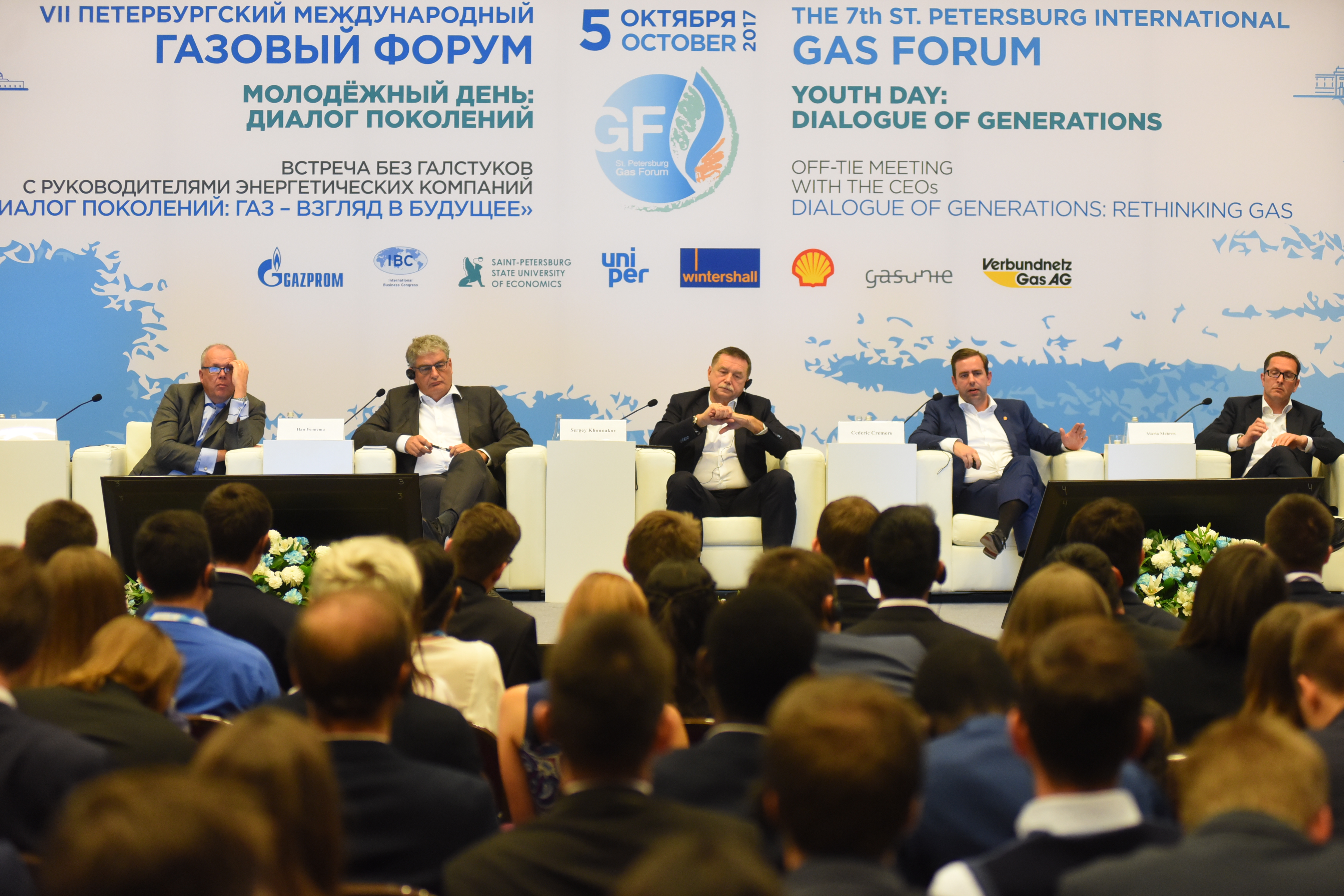 The culmination of the event was a prominent dialog between the top-managers and the audience. Students asked their questions on various topics: from the further industry development and place of the new generation in it, to personal questions about speakers’ success stories, the most important professional and personal experiences and career mistakes. The meeting was held in a truly of-tie manner, relaxed and without any official complexities – all the participants had the opportunity to ask questions, to approach the CEOs asking for valuable advice or seeking career opportunities. 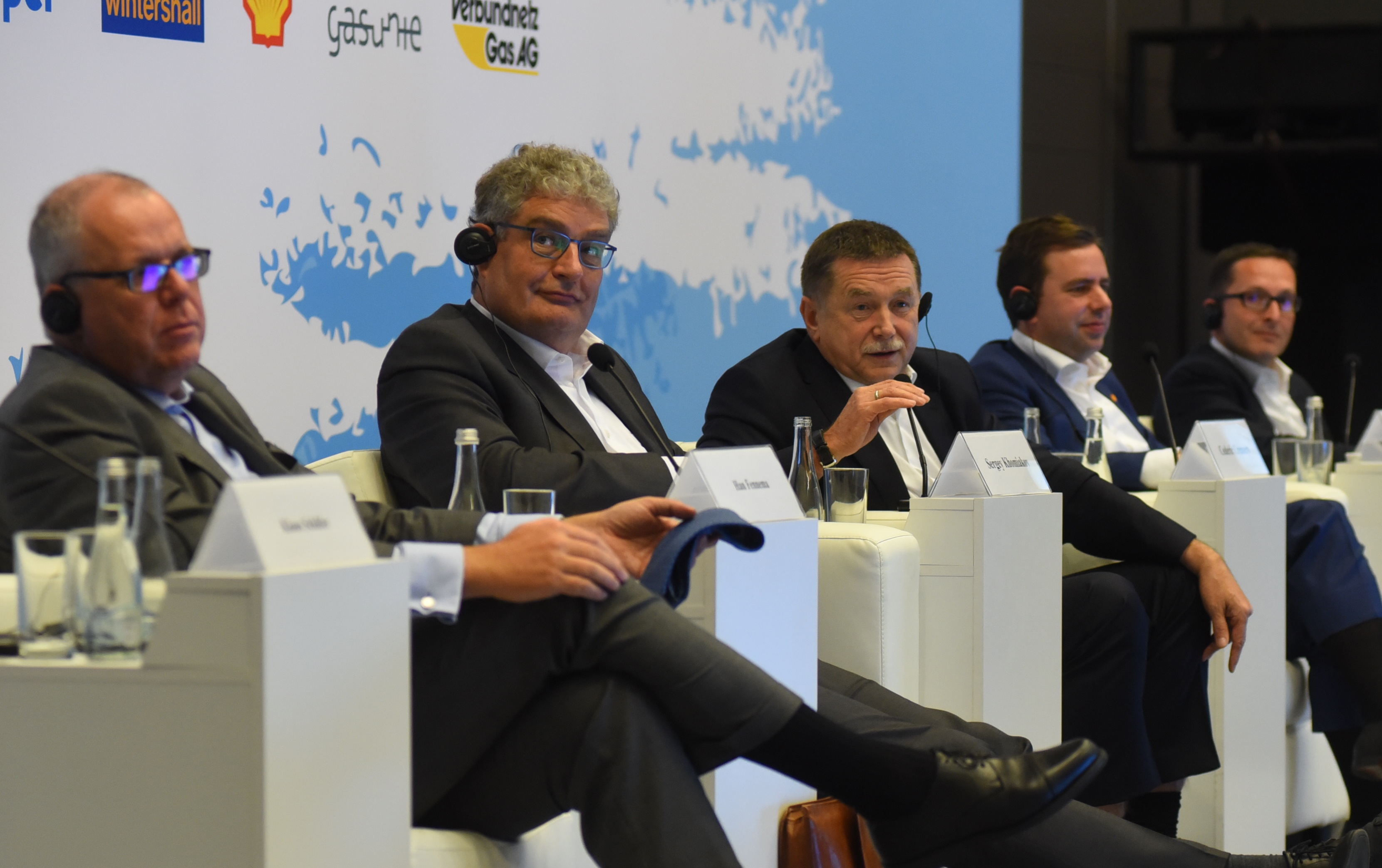 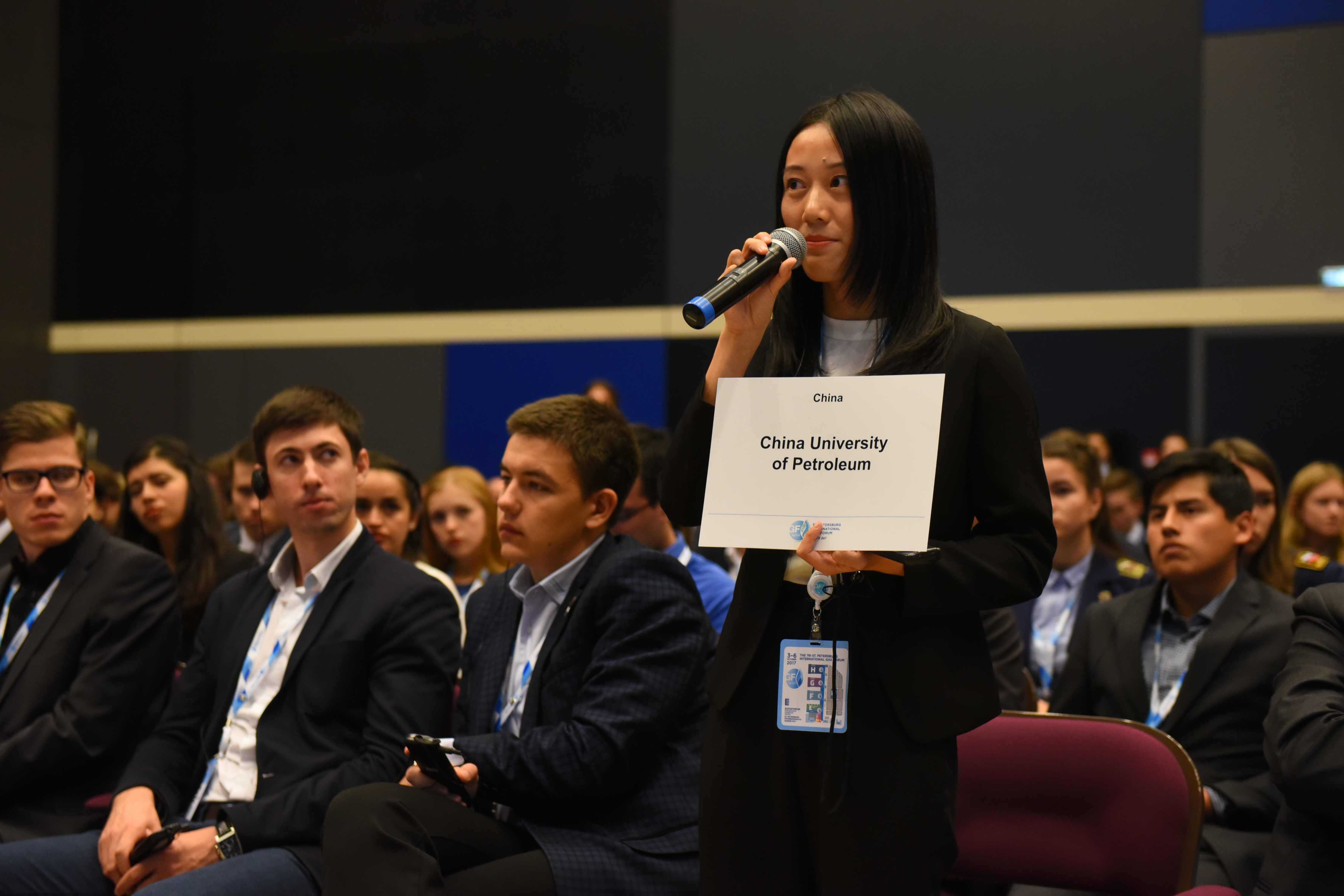 At the end of the event, on behalf of the organizers, Igor Maksimtsev, Rector of UNECON, thanked all business and academic partners of the Youth Day, then Sergey Khomyakov on behalf of Organizing Committee summed up the results and announced the closure of the Youth Day 2017. He expressed the hope that today’s participants in the future will be able to take their places in the chairs on the stage and be presented as the experts and leaders of the industry. 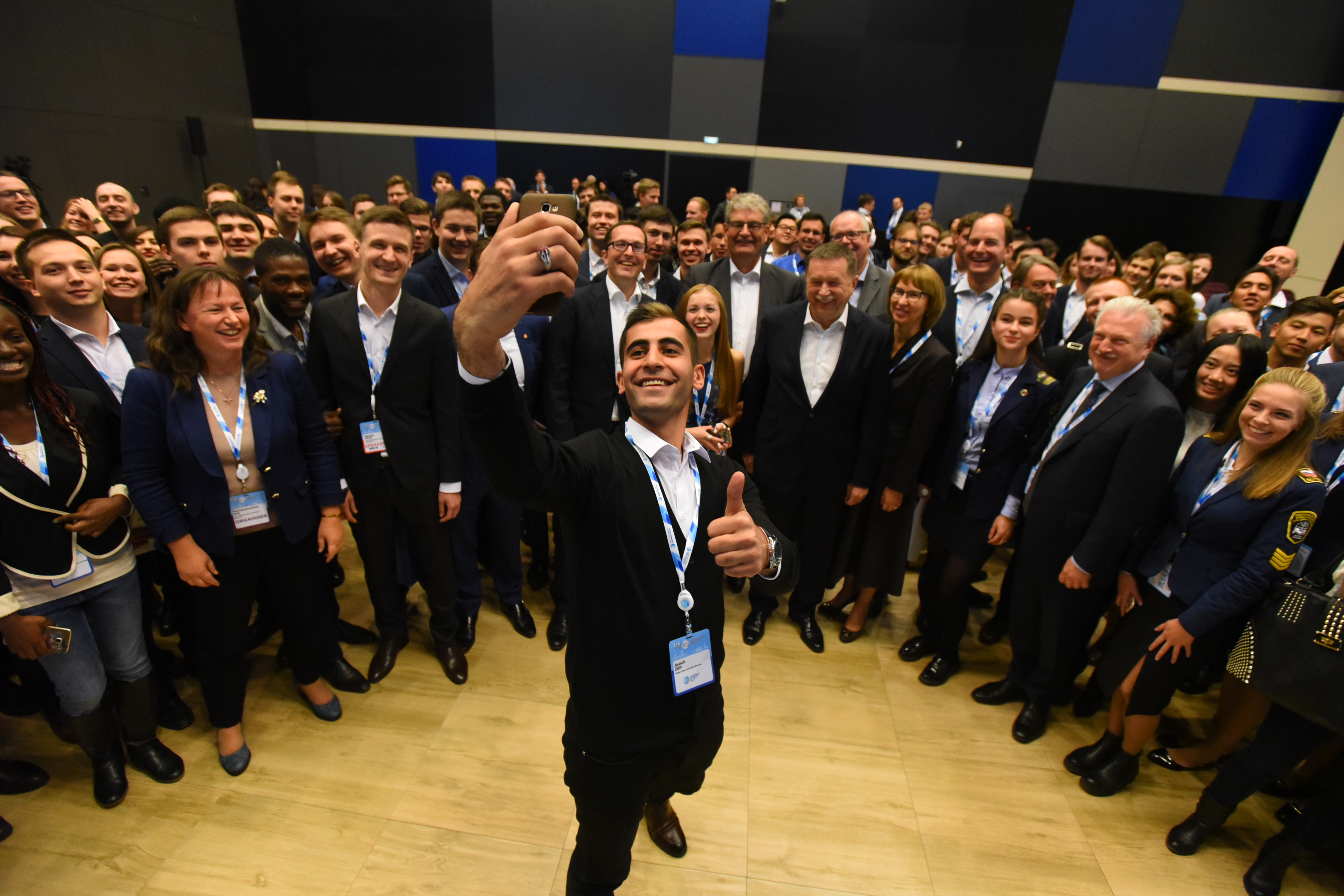 In addition to the official program, there were planned cultural and entertainment events designed to create an opportunity for informal communication and for establishing networking. On October the 4th, the participants of Youth Day went to Tsarskoe Selo to visit the Catherine Palace and the park. On October the 5th, there was a farewell party in the “Jagger” club.

Thanks to the support of the International Business Congress, the Youth Day within the framework of the St. Petersburg International Gas Forum will once again open its doors to talented students from all over the world in 2018. The selection of participants starts on the 16th of April 2018, students from different universities of the world are invited to participate.